Enjoy the unexpected pleasure of take-out cocktails …. here’s a current selection of bottle options, available to sip at home, in addition to our regular cocktail menu which is available to-go. 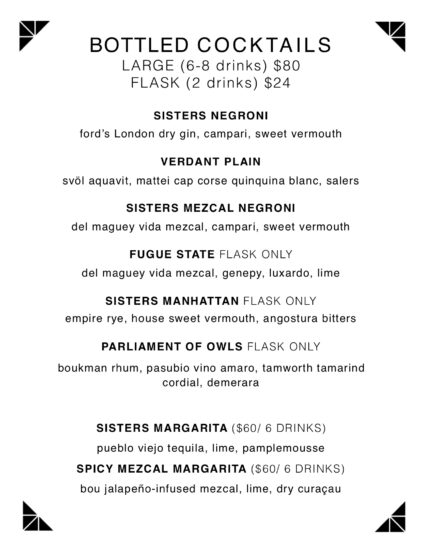 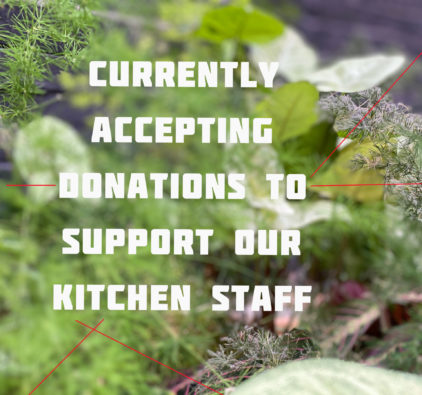 Thank you so much for your support always, and especially during these incredibly uncertain and overwhelming times. We deeply appreciate the outpouring of love we’ve received this past week,  even as everyone is grappling with their own responsibilities and needs.

We have necessarily closed our doors for the safety of staff and the community, and are not at this time offering take-out or delivery services.

While we are navigating helping our staff through this temporary closure, and the rapidly changing information about what relief is available, we are most concerned about those most vulnerable. For us, that means our kitchen, many of whom have families both here and out of the country, and do not have other sources of income.

If you desire to make a donation to us, we will at this time be distributing funds from this gofundme between the 9 members of our kitchen staff.

We completely understand that we are one amongst many many fundraising efforts right now, but we wanted to open an avenue for people who are able to contribute something if they wish. Every donation is greatly appreciated, and we will certainly be in the mood to celebrate grandly once it is safe to reopen our doors!

MKL’s original material started with 3 Generations Walking, a production effort shared with Herman Pearl, a.k.a. Soy Sos. The pair’s debut, Skin, was released on Buddah Bar, At the same time, the duo began releasing remixes and MKL’s first contribution to Wave Music – the celebrated label founded by the legendary Francois K – was remixing Calm’s “People From The Earth & The Sun” with Soy Sos, which was released on a single alongside a remix from Dixon. Shortly after that, the 3 Generations team worked on “Slavery Days” out Spiritual Life Music, a label that combined world music and soulful house. “Slavery Days” got over ten licensing agreements and was included on the highly influential “ Body & Soul Vol. 4″

“Seven Times” – Lion1Music’s first release in 2004 – was a 12” that blended future jazz and deep house and utilized the production chemistry that had developed between Michael Lopez and Herman Pearl.

“The goal is to bring different musical communities together under one banner and, in the process, increase the global awareness of Lion1Music,” explains MKL. “We’re a progressive label for progressive music of all genres.” Tastemakers at major record labels soon became of MKL’s abilities which in turn have led to remixes for John Legend (“Green Light”).

MKL’s newest release, “Forever Love” is indicative of his emerging sound, blending deep house, techno and infectious chord progressions. When not in the studio MKL has been busy playing his trade behind the turntables both internationally and domestically. Recent ports of calls for the musical wanderer have included Japan, France, Moscow and Tulum. When at home he spins at some of the hottest nightspots in the Big Apple including Output, Cielo and Le Bain. The summer months sees MKL juggle a busy schedule of high end private bookings in the Hamptons & NYC, where he has recently spun at Cipriani and Skylark.

This mix was recorded live at Sisters on November 5, 2016.

An introduction to the vibe Mister White has been bringing to Sisters lately.

The Smiling Hour every Weds. 6-8p

“From Paris to New York, bringing that Faya”

I was recently inspired to make this mix of soft and uplifting music, and I’m happy to now share it. I wanted to put something together that would reach states of beauty and emotional honesty without fear or embarrassment. Use it to fight the anxiety of our times.

the peddlers: on a clear day

aaliyah: at your best

sonya spence: now i know what love is

fil callender & the in crowd: getting cosy

Space Jam brings us a contemplative, ambient mix for dark and confusing times. Catch her in the Sisters booth 11/18.

Cole Evelev is 24. He loves to fly fish and the last record he bought was great. He remembers seeing Shuggie Otis when he was eight. He made this mix in one take.

Gabrielle Kwarteng is a New York City native who was originally an “iPod music selector” at house parties before becoming a DJ. She’s always found it difficult to identify her favorite genre (but can safely say it’s one that leaves her wanting dance), hence resulting in genre-bending sets. From funk to disco to house to electronic and even Afrobeat (a shout-out to her Ghanaian origins), you’ll never know what you’re going to get from her.