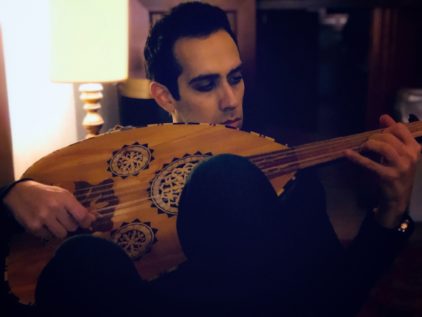 An evening exploring the beauty of the Oud as a singular musical expression and the poetry of Arabic music through treasured songs of Abdel Wahab, Nagat, Warda, Abdel Halim, and Om Kolthoum. Performed on a 1910 Hanna Nahat Oud, with accompaniment from percussionist Philip Mayer.

You can RSVP Here!!

George Abud is a Lebanese-American actor and multi-instrumentalist who was brought up in a family of Arabic musicians and has studied Classical Arabic music for over 20 years. He has originated roles on Broadway, Off-Broadway, and received a Daytime Emmy Award for his work on the NBC Today show with the Broadway production of The Band’s Visit. He has helped bridge the world of the Oud with that of the contemporary musical theatre, and he was the first artist to play solo Oud live for the composer Stephen Sondheim. Coming from four generations of Lebanese Oud players, it is his great pleasure to share the instrument and its voice with others.