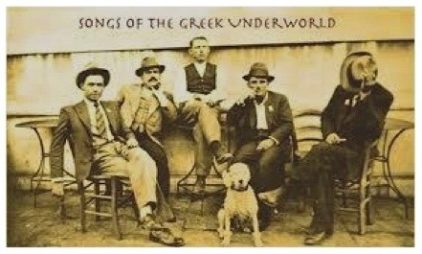 Balkan Mondays on November 4th will feature rembetika music with Dervisi followed by a jam. $10

8pm – DERVISI
Greek Gangsta Blues! Mysterious songs and dances of the old-time Rembetika underworld. Awesome, bittersweet melodies of passion and hashish!.
…the awesomely dark and mysterious songs and dances of the old-time Greek Rembetika underworld, originally performed by the hashish clans, gangsters and pimps of a now vanished Mediterranean subculture and the Greek bouzouki songwriters who mythologized it… “YOU WILL ALL DANCE in ODD METERS because ODD IS GOD, baby!”

DERVISI (literally “dervish”) is a slang word from 1930s Greece
that describes a typical member of the old-time Greek underworld hipster scene. This scene centered around the partaking of certain well-known mind-expanding herbal remedies, while playing, listening and dancing to the Middle Eastern-influenced urban folk music called REMBETIKA – which the DERVISI gang describe as “Exotic Greek Gangsta Blues” due to its subject matter, and attitude.

The Crew of DERVISI include:
George Barba Yiorgi: Vocals, Tzura and Guitar
Barba Yiorgi (Greek for “good ol’ Uncle George”) grew up listening to Rembetika and bouzouki music as played by giants of the genre who performed at the night club his Greek father ran in New York. After some childhood years playing rock and roll, he was abducted by an international smuggling ring and sold as a roadie-slave to the manager of a Greek World Music act called ANNABOUBOULA (which included guitarist/producer George Sempepos, with whom Barba Yiorgi is often confused)

That group went into hiding, but Barba Yiorgi re-appeared in the 21st century as a guitarist for the Surf-Rock combo THE BYZAN-TONES, and started hanging around a clubhousecalled a TEKE where herbal remedies are avidly consumed and tales of old-time Greece are told. Eventually he obtained a bouzouki and started playing and singing the songs of this crew, passed down from the old Rembetiko minstrels of Piraeus, the port city of Athens.
He assembled DERVISI to bring these songs to a wider public.

Stelio “Homeboy Steve” Antonakos: Guitar and Vocals
Stelio (or “Steve” as many American fans know him) played for years with NYC Greek party band MAGGES, (a spin-off of the legendary TRIO BEL CANTO) before stumbling into Barba Yiorgi’s herbal-remedy-infused clubhouse and, inspired by the… atmosphere, deciding to plunge deeper into the mystical DERVISI lifestyle. As Homeboy Steve he leads a parallel life as an in-demand guitarist, songwriter and performer with American Country, Blues and Jazz influences, furthering the tradition of Greek musicians of all eras, who bring unique passion and skill to supposedly unrelated genres.

Petros “Peter” Dervisi: Baglama and Percussion
Petros was walking past the DERVISI clubhouse in Brooklyn when he heard the strains of the Greek music he had danced to long ago in the Old World. Driven mad with a desire to join this underground society, he scoured the pawnshops until he found a baglama, the miniature instrument whose tiny size made it convenient for sneaking into places where the music was banned. Having established his “manga” credentials, we can now reveal that in his other identity, Petros, disguised as “Peter Kowalski” also plays baritone horn with Klezmer revivalists KVETCH, among other bands!

Auxiliary member:
Yiorgos “Big George” Stathos: Clarinet
DERVISI often combines forces with special guest GEORGE STATHOS, adding a special otherworldly flavor to their Greek stew. Big George’s mastery of many traditional Greek and Middle Eastern folk and popular clarinet styles has made him a legend in the World Music community. As soloist, band leader and/or sideman, he has travelled the world, and recorded with Irish folk-rockers The Waterboys, psychedelic World-Beat act Annabouboula, Greek rockers Pix Lax, and even for the soundtrack of “My Big Fat Greek Wedding”!

9pm – a jam led by Dervisi.
Bring an instrument if you are interested in jamming some rembetika music!